Hydroxis is a power bonded Gaia Titan Sorcerer/ Warrior who is in the possession of Jack Direwolf. Hydroxis was a rogue titan that caused all the disappearances of ships and planes in the Bermuda triangle.

His summoning command is "Fight on, Hydroxis"

He attacked Jack Direwolf's ship as it entered the Bermuda triangle. Jack was then stranded in the middle of the triangle, Hydroxis didn't want to harm Jack, but was forced to when the Organization, took a blue crystal which anchored Hydroxis to become a rouge titan. Jack then destroyed the anchor and freed his amulet , then Hydroxis turned against the organization. Hydroxis was wounded and he and the amulet started to crack. Jack then bond his soul to keep Hydroxis from braking and Hydroxis. He then power bonded to him and then transcended the need for a traditional Amulet and was able to summon him from his hand.

Hydroxis seems to be quiet and stealthy, cautiously watching his enemies from the water. He seems to be compassionate though as he quickly defends them when The organization attacked him and Jack. He is very gracious to Jack for his bravery as well.

Hydroxis is a strong and fast brave titan that would do anything to defend his seeker, he and his seeker are able to use Hydroxis special abilities together, along with Hydroxis ability to constrict his enemies, Jack is able to summon a snake that surrounds his opponents.. He uses a variety of water attacks, sometimes including acid, to defend his seeker. He can spit acid and create it on his claws to slice through anything. . Due his Hydroxis is able to use his Aquas Sorcery to use water to attacks of various shapes and/or intensities, either projected, used as a part of melee attacks, etc.

Hydroxis is able to utilize water with his physical combat, using it both as weapon and defense, summoning waves to batter their opponents or whips to to cut or bind and to create a large shield of water or a huge water wall. he can call forth huge water waves to crash down at their targets, washing everything away in a powerful torrent, or to summon large floods and create whirlpools. He is powerful enough that he can teleport via water, merging into a body of water of any size and appearing anywhere else from any body of water.

The reason for the Bermuda triangles mysterious ability for electronic disruption, Hydroxis can disrupt electronic signals, causing cell phones and other electrical appliances to work erratically, or fail completely. He can also use this ability to send out an electrical wave of energy that sends back any opponent. When using this ability with Jack he cab create a dome of electric energy. Along with this ability Hydroxis can use a power called Storm Caller to sense, create, shape and manipulate storms, including strong wind, hail, thunder and/or lightning (a thunderstorm), heavy precipitation (snowstorm, rainstorm), heavy freezing rain (ice storm), strong winds (tropical cyclone, windstorm), or wind transporting substance through the atmosphere as in a dust storm, blizzard, sandstorm, etc. 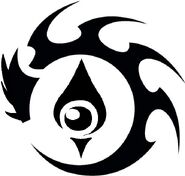