Desert King Guruhi is a monstrous humanoid creature. It has scaly pink skin, long red hair and large fangs. It has a large scar across one of its eyes with the other eye being bloodshot. It has four arms and a scorpion's tail. It has a long retractable blade in the wrists of its upper set of arms. It's teeth and claws are seemingly made of metal.

When used, Desert King Guruhi is a very sadistic fighter, taking pleasure in inflicting harm upon other Titans. Its Disembowel ability allows it to strip an opponent of its special ability. 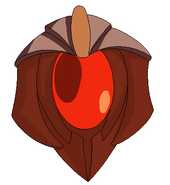 Amulet
Add a photo to this gallery
Retrieved from "https://huntik-fanon.fandom.com/wiki/Desert_King_Guruhi?oldid=7810"
Community content is available under CC-BY-SA unless otherwise noted.