Chriselion (Pronounce: Kree-'zeh-lee-on) is a Krono Titan, created by Choryunami at www.deviantart.com. according to Choryanami this titan orgin is in Venice, Italy. Though she originally didn't aim for it, she realized this is already his powerbonded form: the normal one has probably just whiter feathers and less gold.

Choryunami start's by making a titan named Chrisenn. She was just wanting to colour something quickly, and trying to find out something about this lovely, fluffy Titan... She based it at the winged lion statues of Venice when she drawn him. She later changed it to the current design. Also she changed the name into Chriselion. 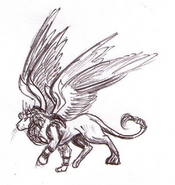 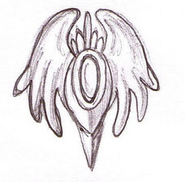 The final art
Community content is available under CC-BY-SA unless otherwise noted.